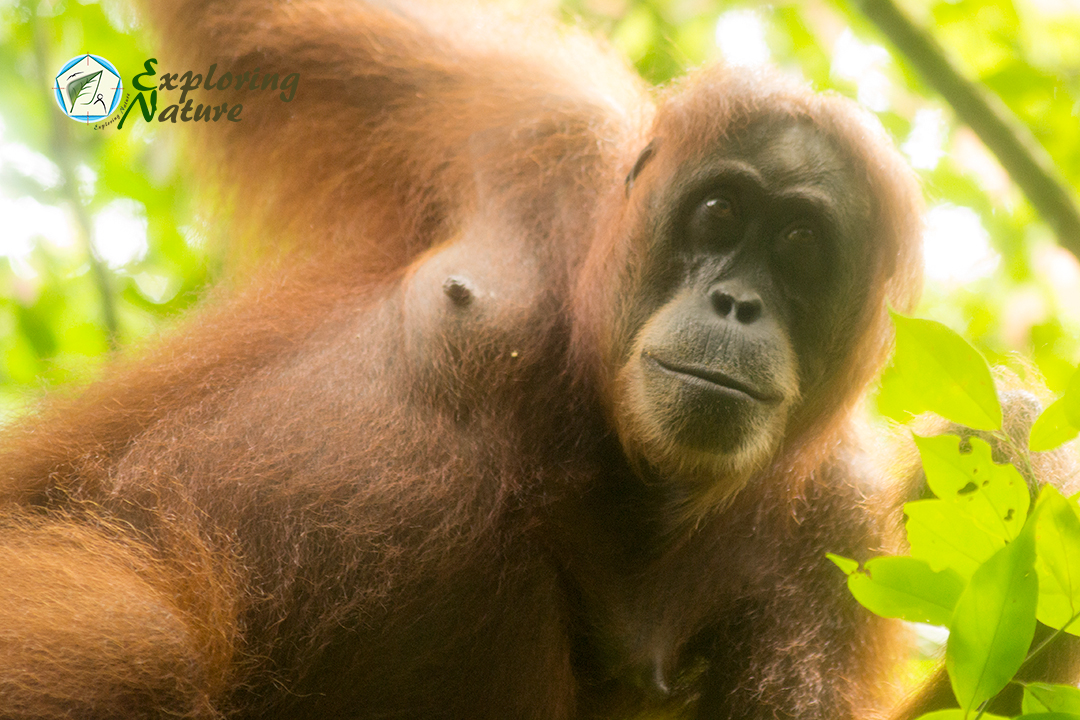 The Sumatran orangutan is endemic to the north of Sumatra. In the wild, Sumatran orangutans only survive in the province of Nanggroe Aceh Darussalam (NAD), the northernmost tip of the island. The primate was once more widespread, as they were found farther to the south in the 19th century, such as in Jambi and Padang. There are small populations in the North Sumatra

province along the border with NAD, particularly in the Lake Toba forests. A survey in the Lake Toba region found only two inhabited areas, Bukit Lawang (defined as the animal sanctuary) and Gunung Leuser National Park. The species has been assessed as critically endangered on the IUCN Red List since 2000. It is considered one of “The World’s 25 Most Endangered Primates.”

A survey published in March 2016 estimates a population of 14,613 Sumatran orangutans in the wild, doubling previous population estimates. A survey in 2004 estimated that around 7,300 Sumatran orangutans still live in the wild. The same study estimates a 20,552 km2 occupied area for the Sumatran orangutans, of which only an approximate area range of 8,992 km2 harbors permanent populations. Some of them are being protected in five areas in Gunung Leuser National Park; others live in unprotected areas: northwest and northeast Aceh block, West Batang Toru river, East Sarulla and Sidiangkat. A successful breeding program has been established in Bukit Tiga Puluh National Park in Jambi and Riau provinces. The main reason for the endangerment of these orangutans is because of palm oil companies destroying the native rain forests.

After another 30 minutes of observing orangutans, we moved on. Eno heard calling of white gibbons, so we rushed to the spot but could not see any gibbons. However, soon after the place became very lively with the arrivals of pig tailed macaque. The southern pig-tailed macaque (Macaca nemestrina) is a medium-sized Old World monkey. Macaca nemestrina can reach a weight of 5–15 kg in large males. These monkeys are buff-brown with a darker back and lighter lower parts of the body. Their common name refers to the short tail held semi-erect and reminiscent of the tail of a pig. They are mainly terrestrial but they also are skilled climbers. Unlike almost all primates they love water. They live in large groups split into smaller groups during the day when they are looking for food. They are omnivorous, feeding mainly on fruits, seeds, berries, cereals, fungi and invertebrates. There is a hierarchy among males, based on the strength, and among females, based on heredity. Thus, the daughter of the dominant female will immediately be placed above all other females in the group. The dominant female leads the group, while the male role is more to manage conflict within the group and to defend it. Sexual maturity is reached at the age of 3–5 years. Female gestation lasts about 6 months. She will give birth to one infant every two years. Weaning occurs at 4–5 months. In Thailand, they have been trained for 400 years to harvest coconuts. As per IUN, their conservation status is Vulnerable.

This monkey was searching for food in the forest and couple of time showed its huge canine to scare us off and eventually left the place with a huge jump over our head.

When we were busy with pig tailed, there was already arrival of another curious creature, the funky Thomas’s leaf langur. Thomas’s langur (Presbytis thomasi) is a species of primate in the family Cercopithecidae. It is endemic to North Sumatra, Indonesia. Its natural habitat is subtropical or tropical dry forests. It is threatened by habitat loss. Its native names are reungkah in Acehnese and kedih in Alas. As per IUN, their conservation status is Vulnerable too.

After that we reached a clear place inside forest where we met other group led by guide Antonio and Dia. That was a time to get some energy. Forest was hot and humid, and the day was quite bright. Even huge canopy cover was not always enough to protect from hit. Therefore we all were dehydrating fast and trekking in difficult terrain of forest with equipment, taking photos and hydrating at the same time was not always feasible. So, we were also waiting for a much needed hydration break.

Eno and Dia collected fruits from forest while trekking and started peeling them off. The fruits were mainly jungle pineapple, oranges, passion fruits, rambutan, and bananas. The fruits were awesome; I never had such juicy pineapples in my whole life before.

When we were busy in enjoying flavour of forest fruits, there were few silent watchers around them or above them. Antonio drew our attention to a huge female orangutan and her baby and they were watching us from a 10 feet tall tree, just above the place where we were eating. Antonio told them that orangutans love fruits specially pineapples and bananas.

Arnab Basu, an Environmentalist and Natural History Commentator. Born in Kolkata on 17th June, 1978 and currently based out of Bengaluru. • An Environmentalist by profession and holds B.Sc with major in Botany and Zoology from 2000 batch of University of Calcutta; MBA in Environment Management from 2004 batch of Indian Institute of Social Welfare and Business Management (IISWBM), Kolkata; Diploma in Chemical Engineering and Industrial Safety. • About two decades of experience in advisory work on environmental law, governance and management systems; • Worked with National and multinational EHS consultancy farm like EQMS, Deloitte etc, currently working as Principal Consultant in ERM. • Participated in about 40 biodiversity expeditions, in Himalayas, Western Ghats, Central India, Sub-Himalayan Terai region, Mangroves of Indian and Bangladesh, Tundra region of Scottish Highland, Rain forest of Sumatra, Desert of Kutch, Western India and Savannah of South Africa. • Conducted assessment of urban and sub urban biodiversity at Kolkata, Salt Lake Wetland, South Bengal (West Bengal). • Conducted Study on Joint Forest Management and Wild Life in South West Bengal under the supervision of Department of Forest, Govt. of West Bengal and under the joint guidance of Environment Management department of IISWBM and National Afforestation and Eco-development Board, Govt. of India. View all posts by aunatural10